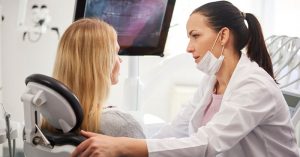 Root canals are an effective way to repair a tooth that has developed an infection in its pulp, or a tooth that has been seriously injured. Root canals are performed by both dentists and endodontists (a dental professional who specializes in this procedure). This safe and effective method of saving teeth that might otherwise be lost is performed each and every day, all across the US. Still, many people wonder if root canals cause health problems. This is probably due to the amount of misinformation that exists about root canals, which is why we’ve compiled the following information – to dispel some of the myths about this dental procedure.

What Is A Root Canal?

A root canal involves the dentist or endodontist removing the pulp and cleaning out the nerve canals of the affected tooth, then sealing it off to protect it from further damage. Because a tooth doesn’t require either pulp or nerves, removing those portions of the tooth doesn’t negatively impact its functionality. Sometimes a crown is affixed over a tooth that has had a root canal to provide more protection and add stability to the tooth structure. Although the exact process varies depending on the individual needs of the patient, the end result of a root canal is the same – a repaired tooth that functions exactly the same as any other healthy tooth.

While it’s true that the internet can be a great source of knowledge, it can also provide an all-too-effective means of spreading misinformation. Despite what you may have read on the internet about root canals causing illness, this is not true. In fact, according to the American Association of Endodontists (AAE), there is no scientific evidence that links root canals to any sort of illness in any other part of the patient’s body, nor do root canals have any connection with cancer risks. The truth is that root canals are not only safe; they also provide dentists and endodontists with an effective way to save badly damaged teeth that might otherwise need to be removed. So how did the myths around root canals originate?

The likely source of the misinformation surrounding root canals started about a hundred years ago, in the 1920s, when a dentist named Weston Price put forth the theory that some diseases were caused by infections. Keep in mind that this was a time when medical science didn’t understand the origins of many diseases. That may explain why Dr. Price’s theory gained acceptance in the 1920s, and why dentists routinely extracted teeth that were broken or infected. In their minds, and according to Dr. Price’s theory, they were not only removing problem teeth; they were also preventing their patients from developing other chronic diseases. This flawed way of thinking didn’t last long. In fact, by the 1930s, Dr. Price’s theory was disproved. But, as is often the case, once a theory is floated in the general public, it’s hard to correct it – even when medical studies from 90 years ago proved it wrong! This is the probable source of the misinformation surrounding root canals.

The truth is that infected teeth don’t need to be removed; in fact, they can be effectively saved thanks to the root canal procedure. And, as most dentists and patients would agree, it’s always preferable to save a person’s natural teeth whenever possible. Contrary to Dr. Price’s theory and much of the misinformation that exists about root canals, it’s much riskier for a patient to avoid having the procedure than it is to have a root canal.

The Risks of Avoiding a Root Canal

Not only are root canals a safe and effective way to save infected or badly damaged teeth; people who avoid having a root canal are often putting their health at risk by doing so. When a tooth is cracked, or when a deep cavity develops in a tooth and bacteria collects in the pulp, infection is inevitable. And any infection that is left untreated can easily spread. In the case of an infected tooth, the most obvious damage can occur to the bone underneath the tooth. Once that happens, it’s entirely possible (and probable) that the tooth will need to be extracted.

But that’s not the only danger that exists if an infected tooth is left untreated. An infection can spread to other tissues in the patient’s neck and head. Ultimately, this can lead to sepsis, which is a life-threatening infection. So, ironic as it may be, the truth about root canals is just the opposite of the myths that surround them: not only are root canals not related to other diseases, they can actually save the patient’s tooth and in extreme cases maybe even save the patient’s life.

This discussion wouldn’t be complete without mentioning another widely held myth about root canals: they’re painful. While it’s true that the explanation of the procedure might be somewhat cringe-worthy for most dental patients, the truth is that root canals are not painful. In fact, thanks to advancements in dental technology – particularly with regard to anesthetics and dental sedation methods – root canals are virtually pain-free. The same holds true whether you undergo a root canal or any other dental procedure: you’re likely to feel very little if any discomfort whatsoever while in the dentist’s chair. And although some dental procedures may leave you a bit sore afterward (including root canals), your dentist or endodontist will provide you with a full set of instructions on how to recover fully and quickly after you return home.

This article was intended to dispel the myths about root canals, and also to assure our readers that this routine dental practice is safe and effective. If your dentist recommends this procedure, there’s no need for concern. In fact, it’s most likely the best way to save a tooth! If you have any questions or lingering doubts about whether root canals cause health problems, don’t hesitate to discuss it with your dentist or endodontist. He or she can provide you with all the information you need prior to your root canal procedure.