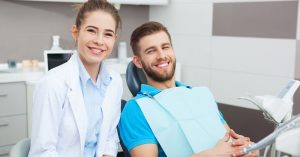 Just about everyone – dentists and patients alike – would agree that it’s always preferable to save your natural teeth whenever it’s possible to do so. And root canals are an extremely common, effective way to remove infection from a tooth and save it from extraction. Unfortunately, root canals have earned a bad reputation over the years for everything from being painful to being the source of disease! Without getting into the details, let’s put one myth to bed for good: root canals do not cause disease of any kind and do not make you more susceptible to developing some other malady. They are also not any more painful than any other dental procedure. Now that we’ve briefly addressed two of the largest misconceptions about root canals, we can devote the rest of this article to explaining what you should know about root canals and why some people need both a root canal and a crown.

Who Needs a Root Canal?

Developing a cavity in a tooth can usually be resolved with a dental filling. If the decay is extensive enough and too large to be fixed with a filling, your dentist might recommend getting a crown instead. Either way, the procedure will involve removing decay and repairing the tooth with either a filling or a crown.

But sometimes decay gets into the innermost portions of a tooth, affecting both the nerves and the pulp of the tooth. When this happens, an infection can develop. And, as is the case with any infection, it needs to be treated promptly before the infection can spread. This is the purpose behind root canal procedures – to remove infection from the nerve canals and pulp of the tooth, restoring it so it can function normally once again.
Some people may need a root canal procedure without ever having any symptoms at all, but not very often. Usually, people who need a root canal will notice one or more of the following symptoms:

A root canal involves the dentist or endodontist (a dental provider who specializes in root canals) drilling out the decay in the affected tooth, then removing the pulp and cleaning out the nerve canals inside the tooth. This may sound painful, but thanks to modern anesthetic and dental sedation methods, getting a root canal produces no more discomfort than any other dental procedure. And although most patients do feel a small amount of pain afterwards while recovering from the procedure at home, a root canal is much easier to recover from than having a tooth extracted. In fact, depending on the complexity of the procedure, some patients actually return to work the same day!

Why Some People Need Both a Root Canal and a Crown

Once a root canal procedure is completed, the dentist or endodontist may be able to simply seal off the tooth with a filling. But that may not always be enough. Your dentist may recommend that a crown be affixed to the tooth after a root canal. What follows are some of the most common reasons why that is sometimes needed:

Of course, it’s also possible that you won’t need a crown after a root canal. This is especially true for teeth in the front of the mouth that aren’t used for chewing, as well as teeth that have never been worked on before. It really all depends on the tooth and where it is inside the patient’s mouth. Your dentist can provide you with more information about why some people need both a root canal and a crown, and can also recommend what is best for you. The important thing to remember is this: a root canal is a very common procedure that is performed every day with a very high success rate. The end result is a fully functional, completely restored tooth that will work just as well as any other healthy, natural tooth.